Until recently we haven’t been able to make the sort of outings most families take for granted. Dietary restrictions have made eating out impractical, and sensory overload has ruled out activities such as bowling or fairs.

So when we made our first successful trip to the movies over the summer, I almost cried. This was in part because my children could finally enjoy a normal pleasure of modern childhood and in part because the movie was just awful. The way people rave about children’s movies, I assumed they were all really great. As I sat in the darkened theater watching cartoon characters try to out-hyper each other for laughs, I realized reviewers must have been speaking comparatively. As in, “Wow, unlike that severely irritating piece of crap I went to see last month, ‘Finding Dory’ was good enough that I didn’t want to blind myself with a plastic straw!”

It was also interesting to find out that a local church holds its services at that movie theater, a revelation that prompted so many questions. Do they keep the concession stands open? Does the pastor say things like, “If you can feel Jesus in this climate-controlled, stadium-style theater, raise your delicious 64-ounce beverage in the air and say, ‘Amen!’”?

When I found out Disney on Ice was coming to Charlotte, I thought this would be a chance for us to try another fun, “normal” outing. My children were excited because anything Disney makes them happy, although they didn’t understand how a story could be told through skating. (They weren’t wrong.)

So we left our little suburban enclave and headed into the city, where the lobby of the sports arena had been transformed into a copyright extravaganza. Everywhere vendors hawked Disney dolls, shirts, light up wands, glow sticks and — I kid you not — $15 snow cones. We settled for the cheapest item on offer, popcorn, which was so salty I could only eat an entire box.

The show itself was just, well, bizarre.

It started with a group of manic-looking, fresh-scrubbed young skaters warming up the crowd, wearing what I suppose would be considered hip hop clothes, dancing hip hop moves, striking hip hop poses. We’re urban and super cool! seemed to be the message. In a completely non-threatening way!

Next a cheerleading squad skated onto the ice, their costumes garish, their hair styles exaggerated. The one African American skater in the cast wore an enormous afro wig.

This led into a skit about a little girl who played hockey or something, I wasn’t really paying attention because I was trying to shake the last of the popcorn out of my box. There was something about how the little girl might let down her team, which logically led into a brief reenactment of “Beauty and the Beast.”

“This is boring,” my daughter proclaimed.

She was right and wrong. I mean, there was no plot whatsoever, and the segues between scenes were patchy, but ice shows have really upped their entertainment ante. Ariel went arial, spinning high above the ice, and Merida let fly a pyrotechnic arrow, which pleased my Scottish husband no end.

I spent the whole first half trying to sell the show to my daughter (“Holy crap, it’s Cinderella!”), but it was no use. Following the Dadaesque first act finale, during which the hockey girl suddenly reappeared and scored a goal while the Disney princesses skated to “We Could Be Heroes,” we made the group decision to leave.

Shedding the layers that had kept us warm in the arena, we emerged into the 87-degree Carolina sunshine. My children love being in the city. Even though we live only a few minutes from downtown, we are worlds away from the bustling crowds and buildings that reach to the sky.

We took our time walking back to the car, my son naming all the hotel brands (his latest obsession) we passed.

“That’s the Hyatt,” he said, “and there’s a Hampton Inn. The Embassy Suites is new.”

Not a block from the arena we came upon the boarded up doors and windows of a building. We had seen a bit of this on the drive into the city, damage left over from the riots that had erupted in Charlotte the week before, when police shot and killed Keith Lamont Scott, an African American man.

Although news outlets from around the world had descended on Charlotte to cover both the peaceful protests and the violent outbursts that followed, to us, the events seemed remote. When relatives called asking about the riots, I would glance out my window at blue skies and green lawns, the loudest sound made by the weed whacker of a neighbor’s lawn guy.

As I stood in front of the boarded facade, I was mesmerized by the murals someone, or more likely, a group of people, had painted. There were mini black-and-white portraits, and a life-sized weeping angel. Messages such as “Show up for peace” and “Vision without action is merely a dream” were painted across bright backgrounds.

On the corner by the murals, a police officer on a motorcycle blocked off one of the city’s main roads. The motorcade of someone important was about to pass, so we waited in the hot sunshine along with lines of cars on either side of the road.

“Someone famous,” I answered.

“Taylor Swift???” he asked and his sister gasped.

A quick smartphone search revealed it was Hillary Clinton, making good on a campaign stop she had postponed the weekend before at the request of Charlotte’s mayor because of the riots.

Presidential candidates don’t travel light, and we watched as black SUV followed black SUV down the road, tailed by white staff vans. Once they had passed, the police officers rode off on their motorcycles, motorists started their cars, and we started walking back toward the parking garage.

The show was over.

I wish this piece offered some sort of resolution about the police shooting here in Charlotte. It doesn’t. It’s merely an observation about the many worlds we live in in this country. I’m sharing photos I took of the murals because I found them powerful and compelling: 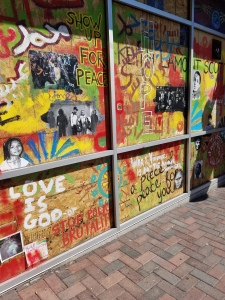